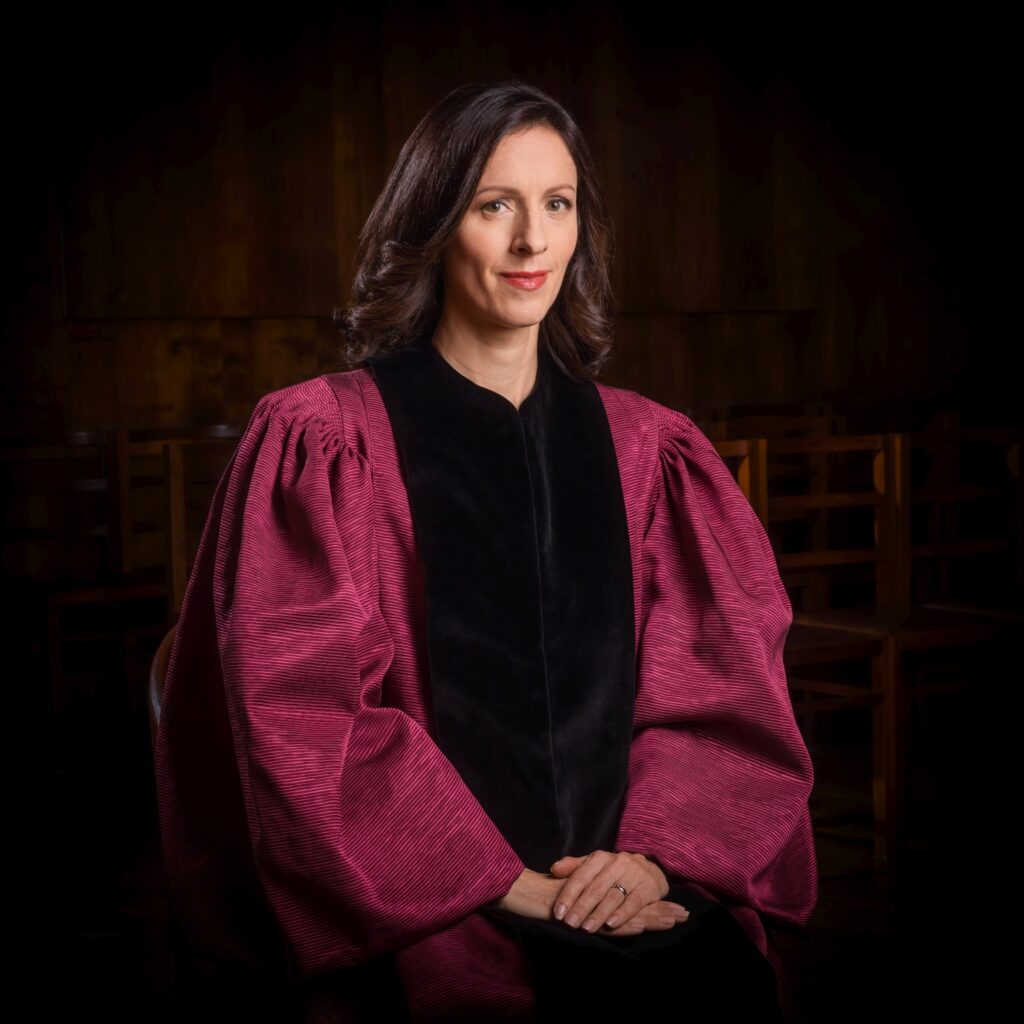 Assist. Prof. Dr Neža Kogovšek Šalamon was born in 1978 in Ljubljana. She graduated from the Faculty of Law of the University of Ljubljana in 2002. In 2003, she received a grant from the Department of State of the United States within the framework of the Ron Brown Fellowship for postgraduate specialist law studies at the Law School of the University of Notre Dame in the USA. During her postgraduate specialist studies, she studied American constitutional law, international law, international humanitarian law, regional and universal systems for the protection of human rights, carried out legal research, and wrote. She completed her postgraduate specialist studies in 2004 with a thesis on the mechanisms of the United Nations for the protection of human rights. After completing her studies in the USA, she was an intern for six months in 2004 at the Human Rights Watch in New York, where she followed the trials for war crimes and crimes against humanity before the International Criminal Tribunal for the former Yugoslavia. Following her postgraduate specialist studies, she returned to Slovenia. In 2006, after having completed a traineeship as a judicial trainee at the Ljubljana Higher Court, she passed the bar exam. In 2011, she obtained a doctorate in law from the Faculty of Law of the University of Ljubljana with a thesis on constitutional, international law, comparative, and other legal aspects of the removal of residents from the register of permanent residents of the Republic of Slovenia.

From 2004 until 2018, she was a researcher at the private research institution Mirovni inštitut – Inštitut za sodobne družbene in politične študije [The Peace Institute – Institute for Social and Political Studies], which she led for six years. During that time, she participated in 32 successfully completed scientific research and action projects. Her bibliography encompasses more than 350 works. Her work was interdisciplinary and focused on the identification of deficiencies in the legislative process and of conflicts of legal norms, as well as on the correctness of the implementation of legal regulations in practice. Primarily, she dealt with various aspects of administrative law, as can be seen from the publication of the monographs Upravno pravo, ranljive skupine in človekove pravice [Administrative Law, Vulnerable Groups, and Human Rights] (2019), Migration Law in Slovenia (2018, 2011), Erased: Citizenship, Residence Rights, and the Constitution in Slovenia (2016), and Izbris in (ne)ustavna demokracija [Erasure from the Register of Permanent Residents and (Un)constitutional Democracy] (2012). Her work in the field of administrative law is intertwined with elements of constitutional, international, European, labour, social, criminal, and family law. She is the co-editor and co-author of multiple collections of scientific papers, inter alia Izzivi ustavnega prava v 21. stoletju [The Challenges of Constitutional Law in the 21st Century] (2017) and Causes and Consequences of Migrant Criminalization (2020). In the field of EU law, she researched the regulation of the freedom of movement, migration regulation, international protection regulation, and protection from discrimination at the EU level. In the field of criminal law, she researched the prosecution of hate speech, protection of the principle of equality in criminal proceedings, protection of the procedural rights of accused persons in criminal proceedings, and regulation of the European arrest warrant; she also participated in drafting the Veliki znanstveni komentar posebnega dela Kazenskega zakonika [The Great Scientific Commentary on the Special Part of the Criminal Code].

Substantively, within the framework of the mentioned legal disciplines, she devoted her attention to thematic studies of fundamental constitutional rights, migration and refugee law, citizenship and statelessness, protection from discrimination, freedom of expression, hate speech, and hate crimes, as well as to procedural rights in the administrative procedure. She was awarded funding from the Slovenian Research Agency within a post-doctoral research project entitled Fundamental Rights of Citizens and Foreign Nationals in the European Union and the basic research project Crimmigration between Human Rights and Surveillance. She studied cross-sectional analyses of identities that put individuals through conflicting legal norms of national, European, or international law in specific and difficult legal situations that require legal regulation. She dealt with fundamental constitutional principles, in particular the principle of a state governed by the rule of law, the legality principle, the principle of the separation of powers, the referendum as a manner of expressing the right of individuals to participate in the management of public affairs, and the conformity of national regulations with international conventions and European legal sources, and followed the case law of international courts. She prepared multiple studies for the European Parliament and the European Commission, and led a research team that drafted annual and thematic reports on the situation regarding fundamental rights in Slovenia for the European Union Agency for Fundamental Rights. She was a member of the Council of the Government of the Republic of Slovenia for Dialogue on Freedom of Religion (2015–2020), a member of the Interdepartmental Commission for Human Rights at the Ministry of Foreign Affairs of the Republic of Slovenia (2011–2014), a member of the Interdepartmental Working Group for Drafting Amendments to the Act in the Field of Protection against Discrimination (2011–2012), and a member of the Council of the Government of the Republic of Slovenia for Exercising the Principle of Equal Treatment (2009–2012). She was also a member of the Honorary Court of Journalists (2011–2015), which considers applications and establishes violations of the Code of Journalists of Slovenia.

Since 2018, she has been the Slovene member of the European Commission against Racism and Intolerance (ECRI) of the Council of Europe, and in 2022 she was selected for her second term of office (2023–2027). From 2008 until 2022, she was a member of the European network of legal experts in gender equality and non-discrimination, which presents reports to the European Commission on national regulations and case law in the field of protection from discrimination. For many years, she has been member of multiple international professional associations of lawyers (e.g. the Odysseus academic network for refugee and foreign nationals law, the ECSOL network for law in the field of sexual orientation, and the CINETS network, which studies the criminalisation of migration). She is active in international academic and research spheres, which she has demonstrated with numerous appearances at conferences at foreign universities, inter alia, in Bristol, Maryland, Nagoya, Toulouse, Madrid, Lund, Brussels, Hamburg, and elsewhere in Slovenia and Europe. As a researcher (ranked as a senior research associate since 2016), she has participated in numerous international projects involving international groups of researchers at universities and institutes in Graz, Padova, Trento, Brussels, Budapest, Warsaw, and Bratislava. She is a member of the International Law Association (ILA), through which she is also active in two international ILA committees: the Committee on Human Rights in Times of Emergency and the Committee on International Migration and International Law.

From 2018 until 2022 she worked as head of the Department for Establishing Discrimination, Counselling, and Advocacy at the Advocate of the Principle of Equality. As part of the management of the body, she was responsible for coordinating the consideration of applications for addressing discrimination, for conducting investigations, for drafting the assessment of the discriminatory nature of regulations, for drafting requests for a review of the constitutionality and legality of regulations, and for the participation of the Advocate of the Principle of Equality in judicial proceedings before courts.

She commenced duties as judge of the Constitutional Court on 1 January 2023.