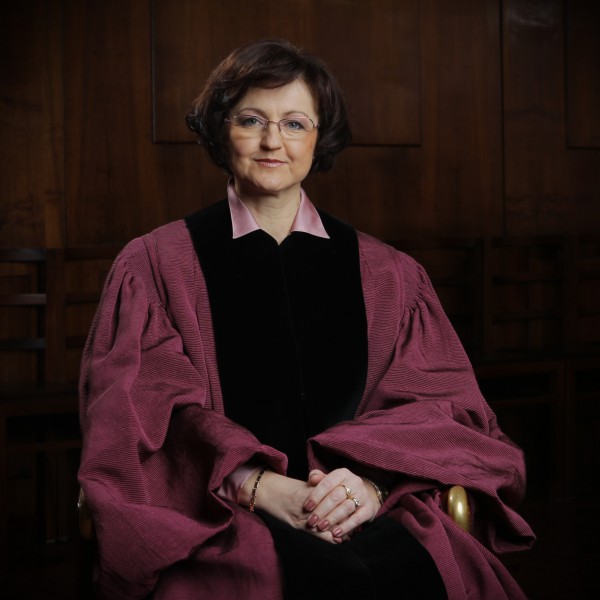 Dr. Jadranka Sovdat graduated from the Faculty of Law of the University of Ljubljana in 1982. In 1983, she passed the public administration examination, and in the following year the state legal examination. She began her career at the Ministry of Justice where she carried out expert work in the field of the system of justice and where after 1990 she was involved particularly in the drafting of legislation in this field. She is, inter alia, the co-author of legislation and legislative materials in the field of attorneyship, the organisation of the courts and judicial service, the state prosecution, and judicial review of administrative acts that were drafted in the first years after the implementation of the new constitutional order. During her final year at the Ministry of Justice, Dr. Sovdat was head of the System-of-Justice Division, the work of which included both the drafting of legislation as well as tasks related to the administration of the system of justice and the financing of the system-of-justice authorities.

Following the defence of her master’s thesis, entitled “Judicial Protection of the Right to Vote in State Elections”, she completed the postgraduate study of constitutional law at the Faculty of Law of the University of Ljubljana and obtained the Master of Legal Sciences degree. At the same university, she was also awarded the academic title of Doctor of Legal Sciences after defending her doctor’s thesis, entitled “Electoral Disputes”. She has delivered papers on constitutional law at national and international legal conferences. In 1993, Dr. Sovdat spent short study periods at the Conseil d’État of the Republic of France focusing on judicial review of administrative acts and in 1998 also at the Conseil constitutionnel of the Republic of France studying electoral disputes. She is the author and co-author of several scientific monographs and numerous scientific and expert articles on constitutional law, and is the co-author of the Commentary on the Constitution of the Republic of Slovenia, published in 2002, and its supplements of 2011.

She is Assistant Professor at the Faculty of law of the University of Ljubljana. As an external staff member, she lectures on constitutional procedural law and on parliamentary and electoral law.