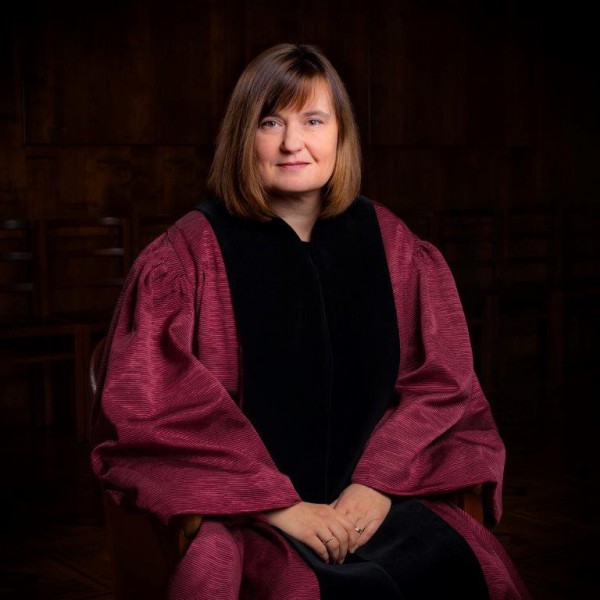 Dr Katja Šugman Stubbs graduated from the Faculty of Law, Ljubljana in 1989, where she received the outstanding bachelor’s thesis award. She completed her master’s degree in law at the same faculty, and her doctorate in 2000. In 2001, she graduated in Psychology at the Faculty of Arts, Ljubljana and subsequently trained as a psychotherapist. She attained the level of psychotherapeutic “counsellor” as a practitioner of transactional analysis in 2008. In the years 1990–1992 she was a trainee at the Higher Court in Ljubljana. Since 1992 she has been permanently employed at the Faculty of Law, Ljubljana, attaining the rank of full Professor of Criminal Law (2011) and Associate Professor of Criminology (2015). She is a Senior Research Fellow at the Faculty’s Institute of Criminology.

Dr Šugman Stubbs’ bibliography includes more than 200 items, a number of which were published abroad. While the majority of these foreign publications appeared in English-language contexts, some of her work has also been translated into French, German, Italian, Czech, and the languages of Republics of former Yugoslavia. She has predominantly focused on topics in the fields of criminal procedure (evidence law, analysis of Slovene criminal procedure, the positions of defendants and expert witnesses in criminal proceedings, the exclusion of evidence, plea bargaining, and EU criminal law) and criminology (the balance of power in criminal justice, the influence of psychological factors in the courtroom, and the psychology of judicial decision-making processes). She has participated in 17 national and international research projects and served as project leader in the initiatives which produced The New Model of Criminal Procedure in the Republic of Slovenia (2001–2003) and The European Arrest Warrant: Comparative and National Perspectives (2006–2008). She is a member of the editorial boards of and a reviewer for numerous Slovene and foreign journals (e.g. the New Journal of European Criminal Law).

Dr Šugman Stubbs was visiting lecturer and researcher at the University of Cambridge (UK) (2003, 2004–2005), Institute de sciences criminelles, Université de Poitiers (France) (2009, 2012), and, as a Fulbright Scholar, at Berkeley University (USA) (2017). In 2008 she was elected Professeur Associé at the University of Luxembourg’s Faculty of Law, Economics and Finance, and she has lectured and conducted research at numerous other foreign universities (e.g. The Free University of Amsterdam, Université libre de Bruxelles, The University of Malta).

Dr Šugman Stubbs has been actively involved in the field of human rights protection. She was elected Slovene representative on the Council of Europe’s European Committee for the Prevention of Torture and Inhuman or Degrading Treatment or Punishment (2015–2016), and acted as senior researcher for the Slovene rapporteur (i.e. the Institute of Criminology, Ljubljana) on human rights issues within the research network of the EU Agency for Fundamental Rights (FRA) (2014–2018). She is an active member and the Slovene contact person of the European Criminal Law Academic Network (ECLAN), within the framework of which she has prepared a number of research reports for the European Commission. Together with her colleague Dr Katja Filipčič, she co-authored the Second Report of the Republic of Slovenia on the International Covenant on Civil and Political Rights (UN). She has acted as advisor to a number of ministers (of justice, internal affairs, and external affairs) in the field of human rights and EU criminal law.

Dr Šugman Stubbs is regularly invited to teach at training programmes for judges, prosecutors, and advocates; she has held workshops for judges (on topics such as judicial decision-making skills, working with difficult parties, witness interrogation), and is a trainer of judges in the framework of the European Judicial Training Network (EJTN). Furthermore, she has held a number of administrative offices at the University of Ljubljana at both faculty and university level (as head of chair; President of the Law Faculty Steering Committee (2007–2009); President of the University’s Commission for Student Complaints (2002–2006); member of the Habilitation (academic rank-assessment) Commission (2015–2016); and member of the Commission for Undergraduate Studies (2007–2009)). She was also a member of the Ethics Commission of the Slovene Psychologists’ Association (2012–2014) and an EU research programme evaluator (Seventh Framework Programme, Horizon 2000, etc.).

She began her work as judge of the Constitutional Court on 19 December 2018.