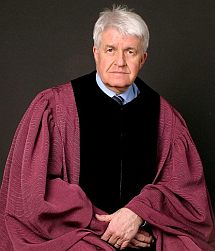 Dr. Mitja Deisinger graduated from the Faculty of Law of the University of Ljubljana and was subsequently employed as an intern at the District Court in Ljubljana. In 1970 he became a deputy municipal public prosecutor, and in 1976 a deputy republic public prosecutor. In 1988 he became a judge at the Supreme Court of the Republic of Slovenia, where he was, inter alia, the head of the Criminal Department and president of the panel for auditing-administrative disputes. In 1997 he was appointed President of the Supreme Court and performed this office until 2003. From 2003 until he was elected judge of the Constitutional Court, he was a senior judge in the Criminal Department of the Supreme Court and the president of the appellate panel for cases involving the insurance, auditing, and securities markets. As the President of the Supreme Court, he co-founded the Permanent Conference of Supreme Courts of Central Europe and, in cooperation with the Minister of Justice, the Judicial Training Centre. From 1984 he led several working groups drafting criminal-law legislation, and as an advisor he also participated in the work of various working groups dealing with the drafting of laws. He also participated in negotiations on Slovenia’s accession to the European Union. He was awarded a Doctorate in the field of criminal law (his dissertation was entitled Odgovornost za kazniva dejanja [Responsibility for Criminal Offences]). He has published extensively abroad and in domestic professional journals, and is the author (The Penal Act of SR Slovenia with Commentary and Case Law, 1985 and 1988; The Penal Act with Commentary – Special Provisions, 2002; The Responsibility of Legal Entities for Criminal Offences, 2007) and co-author of several monographs (The Commentary on the Constitution of the Republic of Slovenia; The Responsibility of Legal Entities for Criminal Offences Act with Commentary, 2000). He teaches Business Criminal Law at the Faculty of Law of the University of Ljubljana, where he occasionally also teaches at the postgraduate level. In 2007 and 2008 he was the head of the Criminal Law Department of the European Faculty of Law in Nova Gorica. He occasionally cooperates with the Faculty of Economics of the University of Ljubljana and lectures at conferences and judicial school seminars. He commenced duties as judge of the Constitutional Court on 27 March 2008.