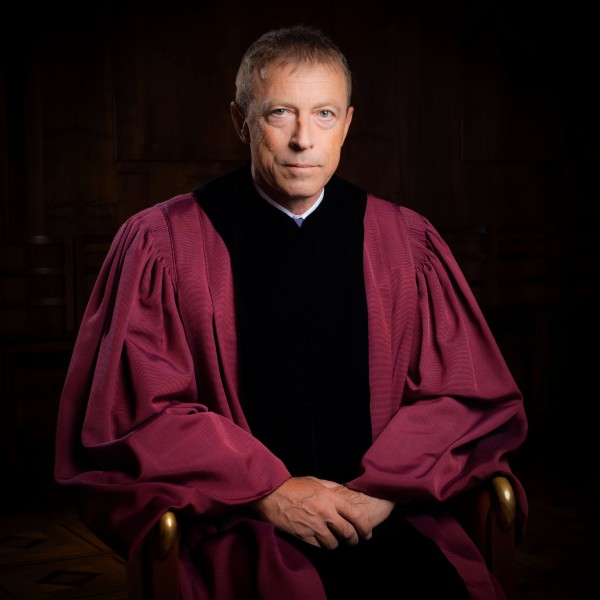 Dr Rok Čeferin graduated from the Faculty of Law of the University of Ljubljana in 1989. In the same year he started to work as a trainee attorney at the attorney’s office of Dr Peter Čeferin in Grosuplje and continued to work there as an attorney after he passed the state legal examination. His father, brother, and he transformed the attorney’s office into Law Firm Čeferin & Partners. He was employed at the law firm as an attorney until he commenced duties as judge of the Constitutional Court.
In 2012, he obtained a doctorate in law from the Faculty of Law of the University of Ljubljana.
Since 2015 he has taught the subject Journalism, Ethics, and Professionalism at the Faculty of Social Sciences of the University of Ljubljana. In 2018, he became Assistant Professor in the field of journalism studies and Research Fellow at the same faculty.
He has participated in several conferences organised by Slovene faculties and different professional associations. After completing his doctoral studies, he participated by delivering a paper or as a lecturer at the Attorney’s School (2014) and the Day of Slovene Attorneys (2015). Upon the invitation of Slovene judges, he delivered a lecture at the Judicial School for Civil Law Seminar (2016), while upon the invitation of Slovene prosecutors he delivered a talk at the Slovene State Prosecutors Days (2017). He has participated in seminars organised by the Slovene Academy of Sciences and Arts twice; the first time on the topic of hate speech and freedom of speech (2015), and the second time on the topic of the temporal dimension of the interpretation of laws (2018). In 2018, the President of the Republic of Slovenia invited him to participate in a seminar on hate speech and freedom of speech. He also delivered lectures at the Days of Slovene Lawyers in Portorož, the Days of European Law at the Law Faculty in Ljubljana, and the international conference CEECOM held by the Faculty of Social Sciences in 2017 in Ljubljana. He participated in these seminars and conferences with contributions dealing with the protection of human rights, primarily freedom of expression.
He is the author of numerous articles published in Slovene and international legal journals (his bibliography includes more than 50 entries in COBISS) and a scientific monograph entitled Meje svobode tiska v sodni praksi Ustavnega sodišča Republike Slovenije in Evropskega sodišča za človekove pravice [The Limits of Freedom of the Press in the Jurisprudence of the Constitutional Court of the Republic of Slovenia and the European Court of Human Rights]. Slovene courts have cited the monograph several times as a reference in the reasoning of their judgments.
He has been a member of the Board of Editors at the journals Odvetnik [Attorney] and Pravosodni bilten [Legal Bulletin] and a member of the Attorneys’ Academy Council. In 2012, the Bar Association of Slovenia awarded him the title “specialist in civil and media law”. In 2018, he co-authored a commentary on the Criminal Code under the auspices of the Faculty of Law of the University of Ljubljana. In 2019, the Minister of Culture appointed him to the expert commission on drafting amendments of the Media Act.
He commenced duties as judge of the Constitutional Court on 28 September 2019.