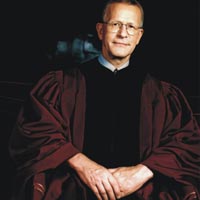 Jože Tratnik graduated from the Faculty of Law of the University of Ljubljana, and passed the state legal examination in 1975. He was a public prosecutor in Kočevje and a deputy district public prosecutor in Ljubljana. In 1979, with the reorganization of the Slovene judiciary, he was appointed secretary of the Public Prosecutor’s Office of the Republic of Slovenia. In 1985 the National Assembly of the Republic of Slovenia appointed him deputy republic secretary for the judiciary and public administration, in which position he served two terms. Between 1993 and 1997 he was a state secretary at the Ministry of Justice, and during the subsequent year a state undersecretary at the Ministry of Finance. As state secretary, he participated in drafting the Denationalization Act, the Elections Act, the Political Parties Act, the Public Notary’s Office Act, the Penal Code, the Criminal Procedure Act, the Judicial Review of Administrative Acts Act, etc. He is currently deputy president of the state legal examination commission. He became a judge of the Supreme Court of the Republic of Slovenia in 1998, and commenced duties as judge of the Constitutional Court on 25 May 2002.  He was President of the Constitutional Court between 11 November 2007 and 10 November 2010.