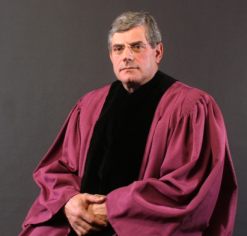 Mag. Miroslav Mozetič graduated from the Faculty of Law of the University of Ljubljana in 1976. Prior to that he had worked in the private sector, and in 1979 he passed the state legal examination. While working in the private sector he dealt with various legal fields, in particular with company law, labour law, and, mainly towards the end of this period, with foreign trade and the representation of companies before courts. At that time he continued his education by studying international and comparative business law at the Faculty of Law of the University of Zagreb. He also worked as a lawyer for one year. With short interruptions in 1990 and 1992 while performing the office of secretary of the Assembly of the City of Ljubljana and the office of director of its legal department, he continued to work in the private sector until 1992, when he was elected deputy of the first sitting of the National Assembly. During that term of office he was also Vice President of the National Assembly and actively participated in the drafting of its Rules of Procedure and the act which regulated the institute of parliamentary inquiry. In 1996 he was re-elected deputy of the National Assembly. During his second term of office he was a member of the delegation to the Parliamentary Assembly of the Council of Europe, where he was predominantly engaged in the work of the Legal Issues and Human Rights Committee. In 1999 he was awarded a Master’s Degree in Constitutional Law by the Faculty of Law of the University of Ljubljana. In February 2000 he was employed by the Constitutional Court as a senior advisor, and was appointed deputy secretary general of the Constitutional Court in 2001. In mid 2005 he was appointed director general of the Directorate for Legislation of the Ministry of Justice, and at the beginning of 2006 head of the Legislative and Legal Service of the National Assembly. He is also currently deputy president of the state legal examination commission, and an examiner for constitutional law and the foundations of EU law for the civil service examination. His master’s thesis, entitled Parlamentarna preiskava v pravnem redu Republike Slovenije [Parliamentary Inquiry in the Legal System of the Republic of Slovenia], was published as a book (Uradni list, 2000). He is one of the authors of the Commentary on the Constitution of the Republic of Slovenia. He commenced duties as judge of the Constitutional Court on 31 October 2007. He was Vice President of the Constitutional Court from 11 January 2010 until 10 november 2013. He assumed the office of President of the Constitutional Court on 11 November 2013.