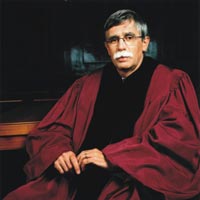 Dr. Ciril Ribičič is a Full Professor of Constitutional Law at the Faculty of Law of the University of Ljubljana, where he has been lecturing for thirty-five years. He was awarded a Doctorate in Law for his research on the development of the assembly system. He is the author of numerous treatises in the field of constitutional law. While he was the President of the Party of Democratic Renewal (SDP) (1989-1992), the Party walked out of the congress of the League of Communists of Yugoslavia (the ZKJ), signed the plebiscite agreement, withdrew from the governing position, and transformed itself into a left-wing social-democratic party. He was a National Assembly deputy for ten years (1990-2000). During the same period he was chairman of the parliamentary Commission for Local Self-Government for two years and the chairman of the Commission for the Rules of Procedure for five years. He has written various treatises and books on federalism and on Slovenia gaining independence, e.g. Ustavnopravni vidiki osamosvajanja Slovenije [Constitutional Aspects of Slovenia Gaining Independence] (Official Gazette 1992). He has published an electoral diary Rad sem jih imel [I Liked Them], which appeared in translation in Zagreb (Bili su mi dragi, Birotisak). He has written essays on parliamentarism in the books Siva tipka 074 [Grey Key 074], Prednost [Advantage], and Podoba parlamentarnega desetletja [An Image of the Parliamentary Decade], and on constitutional amendments in the book Mozaik ustavnih sprememb [A Mosaic of Constitutional Change] (GV Založba, Ljubljana 2003). At the beginning of 2000, as an expert witness concerning the constitutional position of Herzeg-Bosnia, he testified before the Hague Tribunal for the Former Yugoslavia, regarding which he published the book Geneza neke zablode [The Genesis of a Certain Delusion], which appeared in two editions at the same time in Zagreb, Sarajevo, and Idrija. He was the head of the Department of Constitutional Law at the Faculty of Law of the University of Ljubljana, and he led the expert group on the organisation of the state in the constitutional commission that drafted the new constitution. In 2007 he was elected President of the Constitutional Law Society of Slovenia, and published the book Evropsko pravo človekovih pravic [European Human Rights Law] (Faculty of Law of the University of Ljubljana, Ljubljana 2007). Upon the proposal of the Department of Constitutional Law, he was elected judge of the Constitutional Court on 19 December 2000. Since 11 November 2007 he has been Vice President of the Constitutional Court.