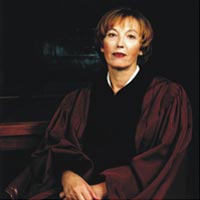 She graduated from the Ljubljana University Law School in 1971. After the graduation she became a teaching assistant at the Department of Civil Procedure. At the same time she also completed her apprenticeship at the District Court in Ljubljana, passing the bar exam in 1973. In 1976 she was awarded a Master’s degree in the area of civil procedure, and in 1982 also a Doctor’s degree. She was appointed assistant professor in 1982, and in 1987 Associate Professor of Civil Procedure. In 1993 she was appointed Full Professor of Civil Procedure and International Private Law. She is an expert in the area of civil procedure and international private law, however her fields of interest are also the protection of human rights and medical law. Between 1994 and 1995 she held the office of Vice-Rector of the Ljubljana University, being in charge of education. She is a member of the corresponding editorial board of the law review Zbornik pravnog fakulteta u Zagrebu, and a member of the Committee on International Commercial Arbitration at the International Law Association. She commenced the duties of judge of the Constitutional Court on 1 April 1998. From 11 November 2001 to 10 November 2004 she was President of the Constitutional Court.