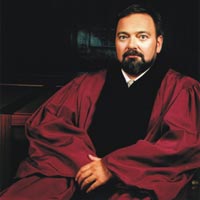 He had graduated from the Ljubljana University Law School in 1981, where he obtained his Master’s degree in April 1989, and was awarded a Doctor’s degree in November 1991. In his dissertation he particularly discussed the constitutional and administrative-law aspects of using information technology in the State administration, and its influence on human rights and fundamental freedoms. Entitled the Protection of Informational Privacy in Europe and Slovenia, his dissertation was published in 1992. Between 1986 and 1992 he was employed by the Institute for Public Administration at the Ljubljana Law School, where he was researching and teaching. He has published more than eighty articles in the area of constitutional law, administrative law and public administration. He is one of the authors of Commentary on the Constitution of the Republic of Slovenia.  He is a professor of Administrative Law at the Faculty of Postgraduate State and European Studies, at the Faculty of Administration and at the School of Social Work. Since 1993 he had performed the duty of Secretary of the Constitutional Court, until 31 October 1998 when he commenced the duties of judge of the Constitutional Court. He was President of the Constitutional Court between 11 November 2004 and 10 November 2007.