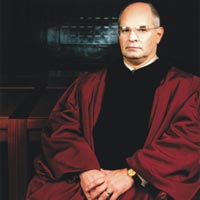 He had graduated from the Ljubljana University Law School in 1971, where he also obtained his Master’s degree in 1990, and was awarded a Doctor’s degree in the area of criminal law in 1996. He passed the bar exam in 1973. In 1998 he was elected associate professor of criminal law. Beginning the 1998/99 term he has been teaching Criminal Procedure. Between 1971 and 1998 he held different positions in the office of the State prosecution, initially as an assistant public prosecutor, then as the head of the prosecutorial office, and, at the end, as a senior prosecutor of the Office of the State Prosecution of the Republic of Slovenia. He was particularly engaged in the questions of substantive criminal law, and was also a member of the working group preparing the 1994 Penal Code of the Republic of Slovenia. His fields of interest are also criminal procedure, juvenile criminal law as well as the organization of criminal judicature and the public or State prosecution in particular. In the mentioned areas, he has published more than ninety longer and shorter articles. He is the president of the Criminal Law and Criminology Association of Slovenia. He commenced the duties of judge of the Constitutional Court on 18 December 1998.